The club has a ColorMunki Photo calibration device (now discontinued) that members can borrow to profile monitors, projectors and printers so that the output has the correct colour characteristics.  You can download the i1Studio Software from X-rite to use the device.

Members could also consider buying their own more modern device from x-rite or one from another manufacturer such as Datacolor Solutions that produce the Spyder. 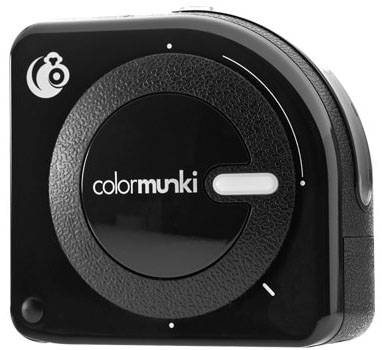 Calibration devices allow users to set up their screen properly for viewing, printing, sharing images and entering competitions. In the case of screen calibration, the calibration software that comes with the measuring device loads the calibration profile into the video card when the computer is started. On some expensive desktop screens, the profile can be written to memory in the monitor when the appropriate software and connection cables are used. Members should speak to Andy, our Equipment Custodian if they wish to borrow the device.

If you wish to have a well standardised and calibrated system your screen colour temperature should be set to 6500K (or D65) using the controls on your monitor.  The colour balance of ambient light varies during the course of the day. The D65 point approximately represents a combination of illumination from the sun and sky at noon in Northern Europe.

For sharing on the internet or submitting images into competitions use the sRGB colour space (or gamut volume) that defines the range of colour that can be worked with and observed.  The sRGB colour space should also be selected with the monitor controls, where that is possible (usually not on laptops). Many commercial printing services require images to be in sRGB encoded. Note that laptops often do not display the complete sRGB colour range (see the analysis of the club laptop below). 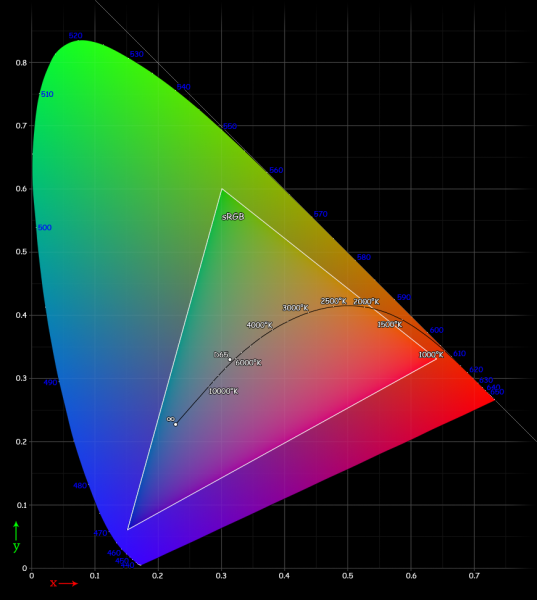 A representation of the sRGB colour space. The white D65 point (shown better below) represents the appropriate colour balance for the white point of correctly calibrated monitors. (source Wikipedia).

Some of the more expensive monitors that are available can show wider colour gamuts such as Adobe 1998 RGB space. 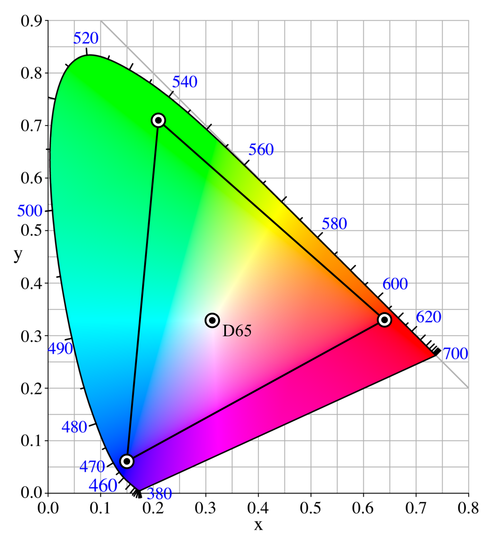 Adobe 1998 RGB colour space is indicated by the triangle in the diagram above (source Wikipedia). The colour balance of ambient light varies during the course of the day. The D65 point represents a combination of illumination from the sun and sky at noon. (source Wikipedia)

If you can control the tone response, or more precisely the gamma correction value (on a desktop monitor), that parameter should be set to 2.2. You can read more about gamma correction at the excellent Cambridge in Colour website or on Wikipedia. This correction is needed because of the way cameras encode brightness values. 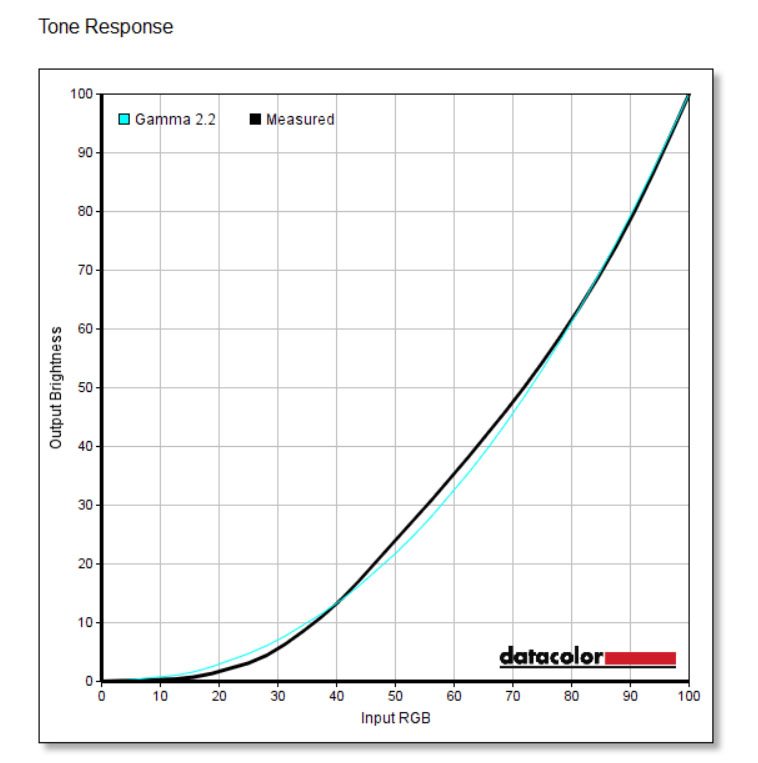 Analysis of the club laptop shows that, even after calibration (black line), it displays some dark tones too brightly and some light tones to darkly (shown as a deviation from the ideal coloured line).

The screen should not be very bright, especially where the aim is to make images that can be printed.  The best brightness will be depended on the ambient light level in the room. Screen brightness values of  80 -120 candela per square meter are a good starting point for the calibration process. A good calibration device and computer system will help you set screen brightness within a defined target range.

Windows laptop displays often show a quite restricted range of colours. The newest club laptop as of 2017-18  only displays 62% of the sRGB colour space or 47% of the Adobe RGB space. 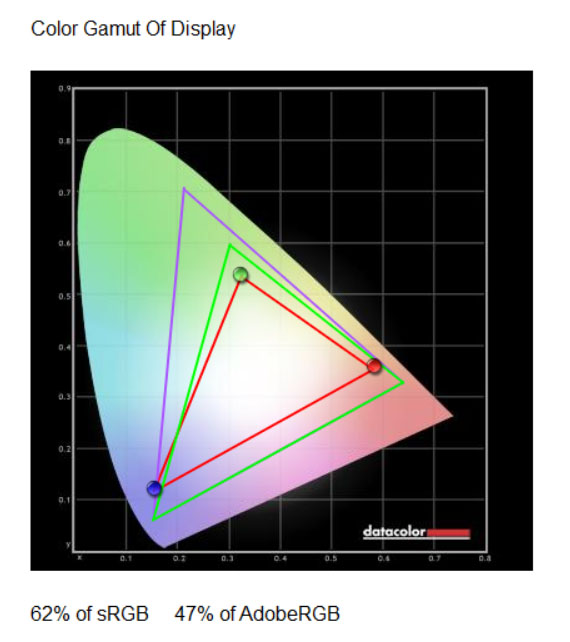 The most saturated or vivid sRGB colours are disappointingly not viewable on the club laptop. The red triangle represents the laptop performance against sRGB (green) and Adobe RGB (purple).

Desktop computers and good quality well-calibrated monitors often produce a much more satisfactory output than laptops. iMAC retina displays, for example, can show a wide range of colours using the MAC P3 colour gamut which has a larger range than sRGB. In general recent Apple devices, including the iPhone camera, capture or display a very good colour balance and range of colours, and so are in less need of calibration than most Windows-based systems.

Printers can also be calibrated to produce a correctly standardized output that should closely resemble your screen view (when both are set up properly). Note however that printers cannot reproduce the luminance (brightness) of screen colours. 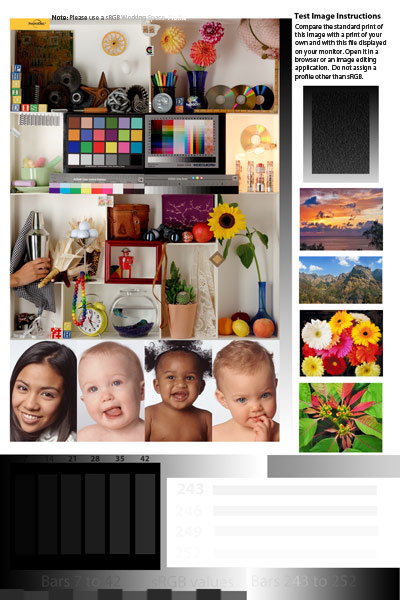 New members can borrow a properly printed version of the sRGB colour space image above from Steve that can be used to verify screen calibration and printer performance. The top left panel was produced by Photodisc, now owned by Getty Images, and has a freeware licence. (PDI Freeware licence).
The rest was produced by Steve.

When examining the image above be careful to look in a direction perpendicular to the screen, especially when using laptops or any desktop screen that has a very narrow optimum viewing angle.  The print of the above should be illuminated by daylight.

A Series of Test Images

After your screen is calibrated, you might also want to determine how well your system is performing by viewing a series of test images.

The sRGB Grainger Rainbow image above has a central white band. The upper boundary of the white band throughout the colour range should have a very small (1 grey-level)  difference in colour from the base of the upper gradients. If you see large sharp discontinuities within the colour gradients your screen has a colour calibration problem.
Right-click the image and open in a new tab to see a larger and more usable version.

Steve’s sRGB colour space greyscale test images below provide a rigorous test since proper viewing of them requires a good calibration (and a good screen). In this type of image, black has a value of  0 and white 255. In computer jargon that is called 8 bit since eight binary digits are needed to encode 256 grey levels for each (colour) channel. Some parts of the greyscale images shown below are only one grey level apart so if you can see all of the differences then you monitor is very well set up throughout the brightness range of 0 to 255. None of the greyscale images below should show any faint colouration if your screen is well calibrated.

In order to carry out proper testing, you will need to see much large versions of the images below. Right-click on each image and either open in a new tab or save to view them at a bigger size on your screen.

If you can read the test text in the lower part of the box below, you can discriminate dark tones very well on your screen.

You will find probably find it hard to read the darkest box blow against a white background, in which case you will need to right-click the image and view large in another tab or save it then view against a dark or grey background.

If you can see the numbers and all of the question marks below your screen is operating very well around mid-grey Note that this is a very stringent test. You might not be able to see these very small differences and still have a well-calibrated screen.

The image below is a test of the mid-grey calibration of your screen.

The image below is a test of the light tone calibration of your screen.

It is unlikely that you will see the darkest test bars (3 and 7) on a print of the card below even on a well-calibrated printer. The lightest (252) might also not be visible in a print. There should be no banding on screen or on prints of the evenly toned grey background below.. 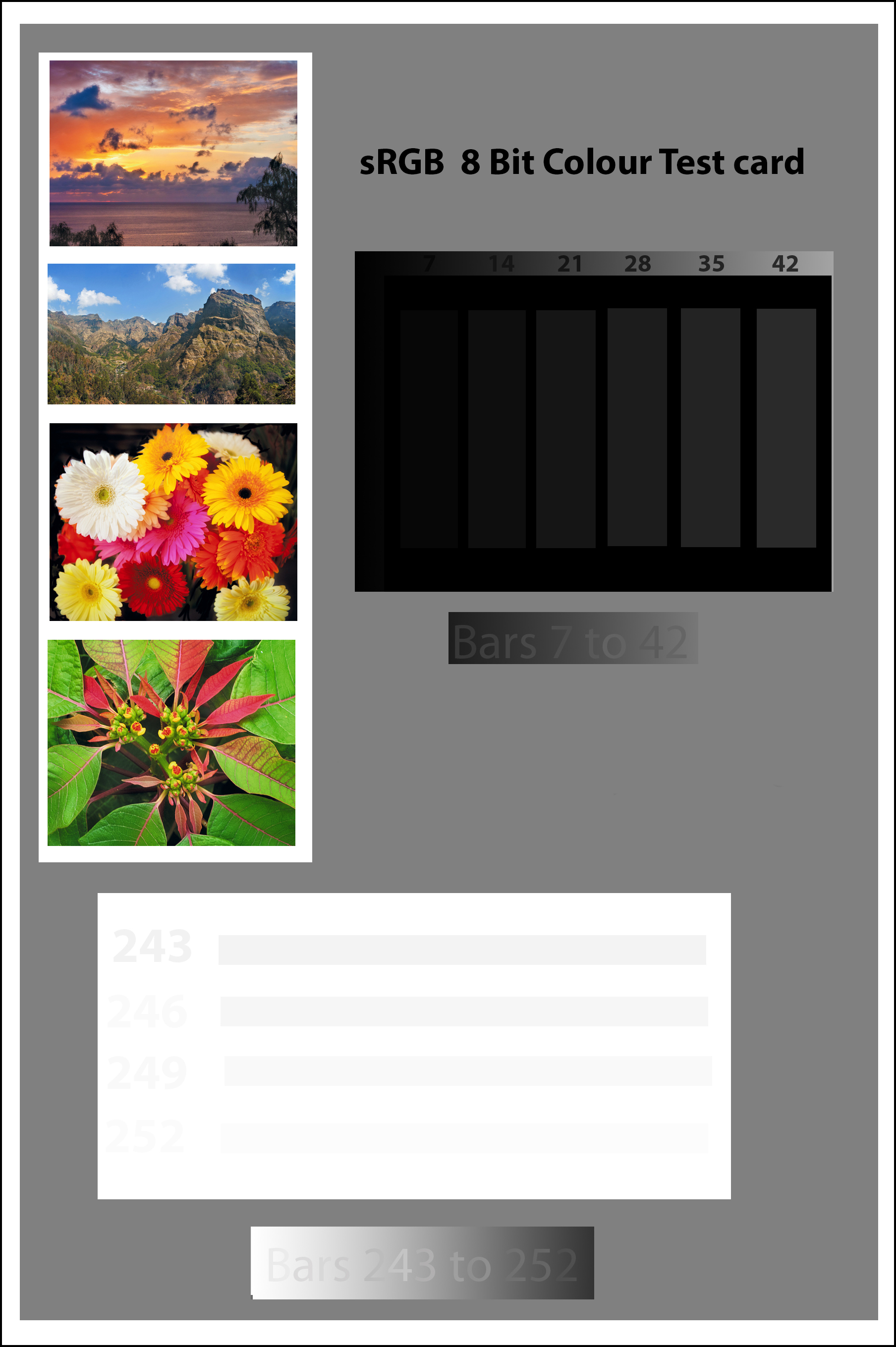 Members who have problems with screen calibration problems can ask Steve for help.

If you wish more detailed information on the ColorMunki and more topics there is a useful 1hr 8 min video below in which soft proofing of prints is also discussed.

If you wish to have even more rigorous greyscale test images look online for versions of the TG18QC devised by the American Association of Physicists in Medicine. You can try here for example. There are are also very useful images and lots of reliable information provided by Keith Cooper of Leicester at Northlight.
http://www.northlight-images.co.uk/why-dont-my-prints-match-my-screen/

Why don’t my prints match my screen?

A Black and White test image